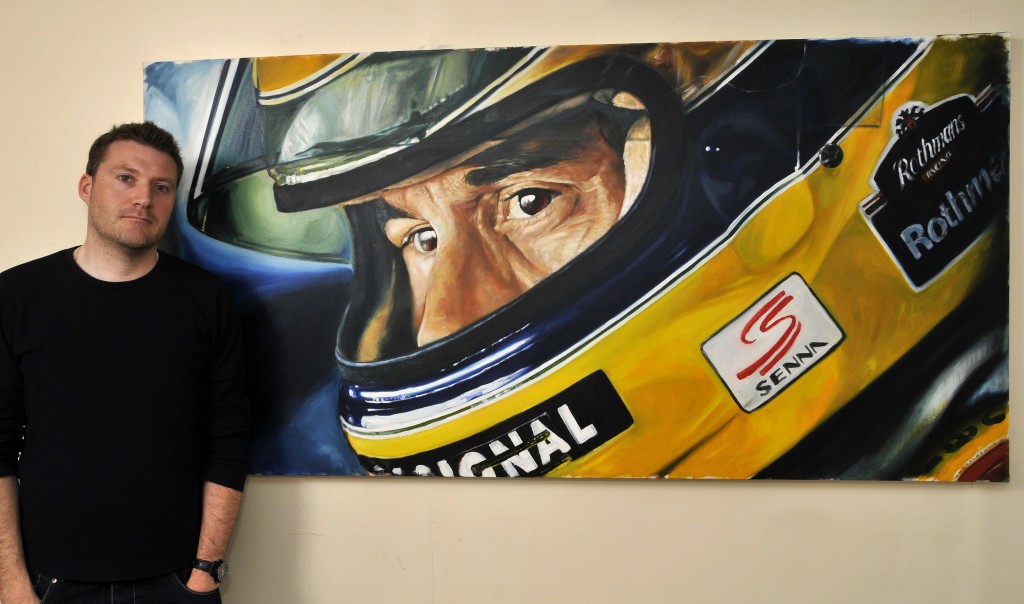 Well as the title says, this one has been a real journey…

Lets start at the beginning. Back when I was a lad, my brother, dad and I would all cram around to watch the Grand Prix, while mum was busy slaving over another epic Sunday roast…

I have to come clean – at the time, I wasn’t a fan of Senna, or any other driver that wasn’t a Brit. Of course, I wanted the likes of Mansell and Brundle to win, but as time went on it became impossible not to acknowledge just what a force Ayrton Senna was when behind the wheel of a car. And so, the fascination, and respect for him grew. I started to take notice of Senna, on and off the track, reading articles etc. and before I knew it, I was a Honda fan too – In fact I still drive a 20 year old Prelude, as advertised by the great man back at it’s release.

So, my memories of that race weekend back in May 1994 are vivid, very vivid indeed, as I’m sure they are for so many of you.

Fast forward 18 or so years, and I’ve just finished stretching up some large canvases, one of which is 6’x3′. I had been working on a series of paintings I called ‘Windows’ – studying the eyes, or ‘Windows to the soul’. I’d painted Audrey Hepburn and Elizabeth Taylor amongst others, but my mind went to Senna, and one shot in particular.

I started to sketch out the piece, then rough it in, in between my commission work. 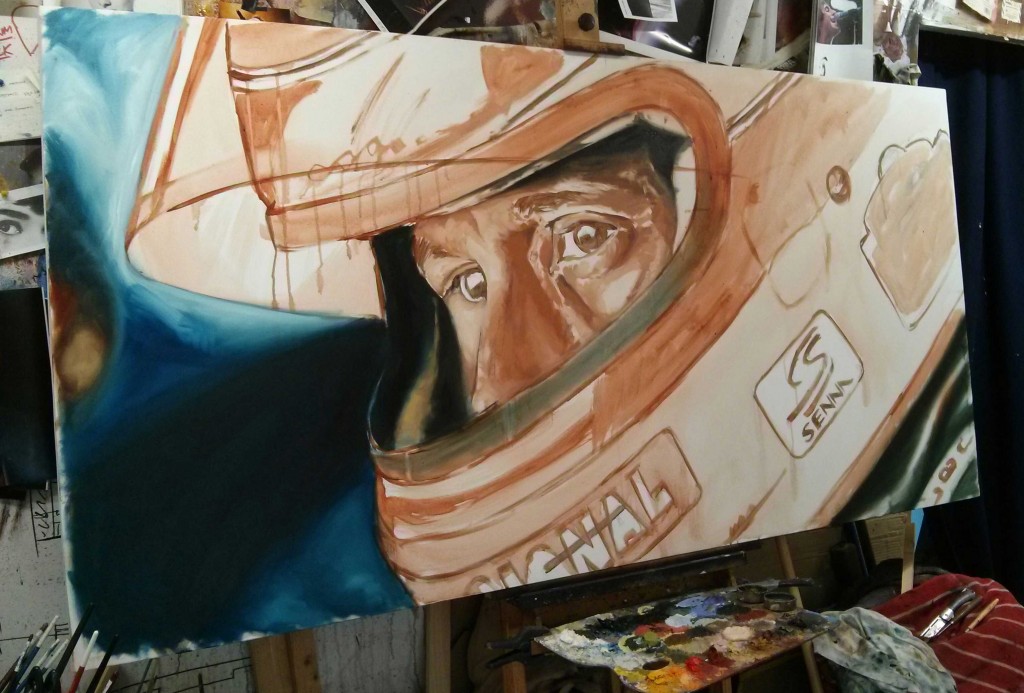 Boxing Day 2012 and my dear mum was diagnosed with cancer. The initial prospects were good, we were told, but sadly it was not to be. In October 2013 we lost her. I was devastated. I had always been very close to her as we were actually very similar. The thought of painting anything at all was so far down my list it was almost insignificant, even though I had to earn a living, especially with a six month old boy now to think of. Over those first few months, somehow I managed to get just the commission work finished as required, but nothing for the gallery or for ‘me’, all the time the beginnings of this work staring down at me from the wall.

Having finished it, I now know exactly what has been going on. This painting had become about loss, literally.

The look in Senna’s eyes is so haunting in this shot, that for me it is one of the most emotional ones of him, and that was the issue – it was now an association of my own personal loss too. I couldn’t touch it. Mum had seen me start it, but she wouldn’t see it finished. I knew there was no way I could paint it, without thinking of her for pretty much the entire process. As such, it sat there for a few months. I wanted to see it finished, but the very idea of starting work on it again filled me with dread.

Until one day, I turned a corner and the canvas ended up on the easel once more.

But it wan’t just a canvas any more, it was my nemesis. I had been questioning everything since mum passed. All the clichés I’m afraid: Life, it’s purpose, work, my worth as an artist. I mean, a colour-blind artist! Who was I trying to kid? But with the anniversary of Ayrton’s untimely death coming up, I saw a great quote of his:

“I’m very privileged. I’ve always had a very good life. But everything that I’ve gotten out of life was obtained through dedication and a tremendous desire to achieve my goals. I had a great desire for victory, meaning victory in life, not as a driver. To all of you who have experienced this or are searching now, let me say that whoever you may be in your life ……you must show great strength and determination…….One day you’ll achieve your aim and you’ll be successful.”

I like to think I have a fairly good outlook on life. Despite what happened I can still say that I am happy, and content for that matter. Content doesn’t mean that I have no ambition, far from it, I strive to be successful at what I do, but I am content with my lot in life right now. I know what’s important (to me at least) and it’s not fame or riches, it never has been. I’m not naive, money is a necessary commodity, but ultimately it buys the same things, just more of them, or more expensive ones. If you have a roof over your head, food in the cupboard and your friends and family around you, my friend you have it all. You came here with nothing and you will leave with nothing, it’s not whoever collects the most stuff wins either, I’m afraid that won’t matter in the least. I am a firm believer that you have to do something you love. You spend most of your time ‘working’, so why not strive to make it something that you truly enjoy, that drives you. Not the pay or lifestyle it generates, but the very act itself.

That’s what Senna did, it’s what I try to do and I think it’s what separates current F1 drivers such as Lewis Hamilton from the pack – he clearly loves what he does, not the inevitable money and fame, but the driving and the winning. Hence, if there’s a gap he’ll go for it, even if it puts a few noses out of joint. Remind you of anyone?…

Nothing worth doing is easy is it. It’s been a real journey painting this piece, especially with the timing which ironically, I hadn’t thought of way back when I started it. But with the 20th anniversary approaching and a new attitude towards the painting, things started to click into place and feel ‘right’ again. I’m not religious and I don’t go in for the whole fate concept, but I trust my gut instinct. It was ‘right’ that I’d be working on this now, it was ‘right’ that this piece, about loss, would be the piece to get my mind back in the game, to allow me to address what had happened and ultimately to prove to myself that I was still here and could still paint.

And here we are, I don’t know how many hours later, with the finished work.

There are some great lessons for life out there, if you just pay attention to them.

UPDATE: In September 2015 I rode the length of the UK – Lands End to John O’Groats (nearly 1000 miles) in aid of The Hospice of St Francis in Berkhamsted where my mum spent her final weeks. This really is a fantastic cause and they need our help badly. They receive only 20% funding from the government of the £4.7m needed to run their incredible hospice each year. The rest is raised by causes such as this, and people like you and I. 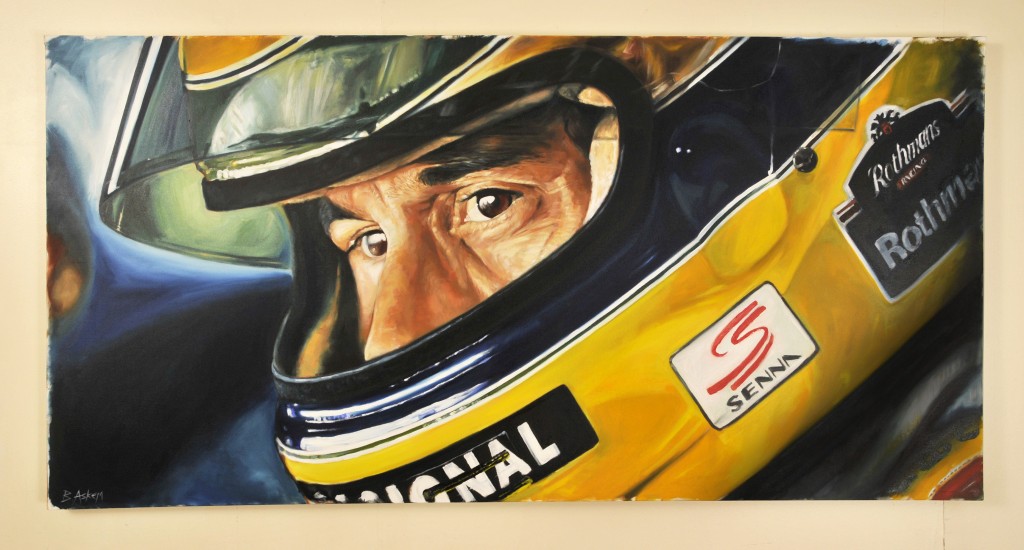 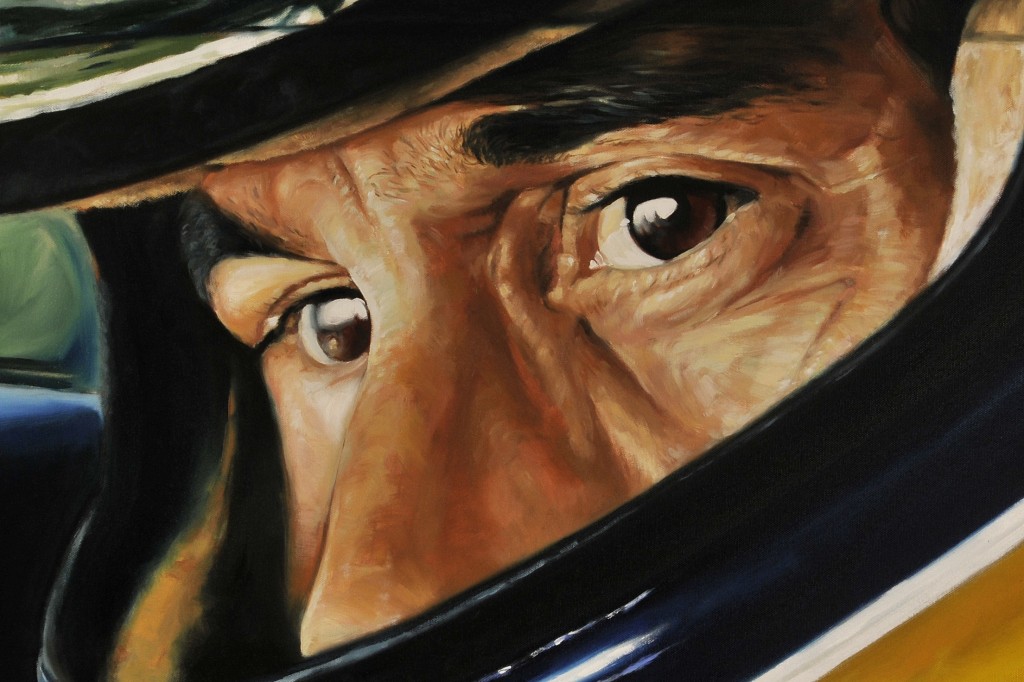